The University of Ghana-Legon Campus Pastor of The Church Of Pentecost, Pastor Kwadwo Obeng, has advised young Christians not to compromise the values and principles of the Kingdom of God.

He added: “If chastity is my value, then my principle will be no pre-marital sex.”

Pastor Obeng was speaking on the topic, “The values and principles of the kingdom of God” during the just-ended PENSA Ghana Conference which took place concurrently at three centres – University for Development Studies (UDS) – Tamale; Kwame Nkrumah University of Science & Technology (KNUST) – Kumasi, and the Pentecost Convention Centre (PCC) – Gomoa Fette.

Using Matthew 6:32 – 33 and Revelation 3:11 as his main texts, Pastor Obeng noted that being anxious about things in life can cause one to do something they never intended to do.

The UG Campus Pastor asserted that seeking first the Kingdom of God has two meanings – accepting Jesus as Lord and personal saviour and prioritizing one’s life by putting God first in all things.

He, however, noted that the values and principles of the Kingdom of God are the things to carry to transform society.

According to him, values are the primary and fundamental beliefs that guide or motivate attitudes or actions. They provide general guidelines of conduct, whereas a principle is a widespread belief one has about the way he/she behaves.

He explained that there are personal and institutional or cultural values. Cultural values, he said, are accepted by societies and reflect what is important in each context. The values in the Kingdom of God are what are accepted.”

He pointed out that keeping principles comes with self-discipline and resilience, and also comes with sacrifices, saying, “A Christian with principles does not live on what is popular.”

The Campus Minister further explained that a kingdom is the domain of a king or a king’s sphere of influence.

He indicated that every kingdom has subjects, accepted norms, and lifestyle and seeks to extend its territories.

“As a church, we possess nations to transform every sphere of society with God’s Kingdom values and principles,” he said.

He added: “The Kingdom of God is a people who belong to God and they become God’s domain. The Church is a called-up group with a covenant with God. When you are called up, you become a domain of God.”

He, however, examined that there are some people in the kingdom of Satan. Therefore, it is the responsibility of Christians to win them to God’s Kingdom.

Concluding his sermon, Pastor Kwadwo Obeng admonished the youth to take up Jesus Christ as their role model, saying, “There are good role models, but Jesus should be your ultimate role model.” 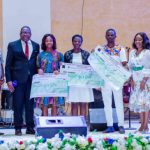