The PENSA Ghana Coordinator, Elder Collins Ayamga gave this clarion call during the Thursday morning session of the 4-day Conference where he ministered to the theme, “The Value of a Soul”.

Value of man as derived from Creation

Reading from Genesis 1:27; 2:7, 19, Elder Ayamga indicated that God created all the beast of the earth and birds of the air from the dust of the earth, however, with man, God chose to create them after His own image. The image of God, he explained, placed great value on the creation called man among all other creation of God, and thus no one has the right to despise another human being. Talking further about man, the PENSA Ghana Coordinator mentioned that although man have a physical body formed from the dust of the earth, there is also a part of man known as the soul or spirit which goes back to God even after the physical cessation of the life of that person.

Why the Soul is valuable

Touching on the value of the soul of man, Elder Collins Ayamga revealed that the spirit or soul of man is very valuable because; (1) It lives eternally, (2) God sent his Son to die for souls, and, (3) the fact that Jesus esteemed the soul of a man high above the value of the entire world as quoted in Matt.16:26: “For what will it profit a man if he gains the whole world and forfeits his soul? Or what shall a man give in return for his soul?” He encouraged his listeners, therefore, not to live double-standard lives, but lives pleasing to the Lord.

Elder Ayamga highlighted that given the ascendency of sin and the daily perishing of souls, there is the strong exigency for the Christian youth to rise to the occasion by giving their all to joining the rescue mission for aggressive evangelism.

MY FAITH, THE STORM AND MY RESPONSES – APS. DAVID NYANSAH HAYFRON

MAINTAIN THE GLORY OF GOD IN THE CHURCH – YOUTH PATRON

Once Saved Is Not Forever Saved – Pastor Nsiah Asserts
13 Jun, 2022 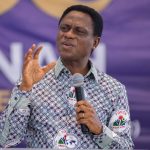